Douglas Wilson Companies (DWC) has received unanimous approval from the San Diego County Board of Supervisors for the addition of 218 new entry-level homes on a 52-acre parcel in the unincorporated area of Spring Valley.

When DWC acquired the undeveloped site in 2014, it was approved for a 710-room destination golf resort and commercial office uses. The plan approved on Dec. 6, 2017 includes three town home styles, expected to be priced from the low $400,000s. 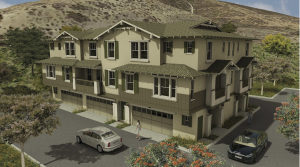 “For the last three years, we’ve worked with the community group and government agencies to re-envision the highest and best use for this property, creating a plan for desperately needed, moderately priced housing,” said Douglas P. Wilson, DWC chairman and CEO, who noted that the plan evolved from 266 multi-family units to 218. “We believe this is one of the largest projects of its kind in San Diego County, where multi-family, for-sale homes will be available in the low $400,000s.”

Twenty eight of the 52 acres will be placed in an as open space preserve to protect Hansen’s Creek and sensitive plant and animal populations.

“Over 54 percent of the property will be maintained by a nature conservancy in perpetuity as a result of our agreements with the community planning group, County planners and State and Federal Wildlife Agencies,” said Wilson. “ This has been a comprehensive effort to create a win-win for all stakeholders, including San Diegans looking for a reasonably priced new home.”

Sweetwater Vistas in the News: